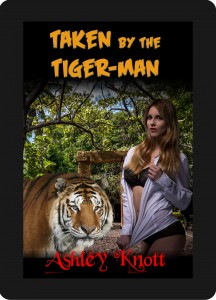 Taken by the Tiger-Man is a hot and steamy fantasy story of a young, fertile female and a mythical predatory feline monster!

Lana has dreams and desires that are nothing to do with weaving cloth and marrying the man her father has chosen for her, though she has little hope of fulfilling them. But now, something is in the jungle. Half man, half tiger, it is killing livestock and hunters. Warriors sent to dispatch it have not returned. Lana’s people are desperate. Their wise man decides a sacrifice must be made to appease the monster. A virgin must be given to the creature to slake its inhuman lust.

Lara is caught in a compromising position by her father, and seeing no future for herself in the village, she volunteers to be the tiger-man’s sacrifice. She enters the forest alone and scared, but will she find the monster’s lusts awaken something hungry within her own self? Will she be able to handle the monstrous creature’s explicit, forbidden desires? Will she match them with her own?