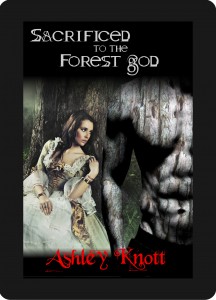 Sacrificed to the Forest God is a hot and steamy fantasy story of an ancient, inhuman woodland god and a fertile female!

Elise’s village is in the grip of a terrible winter that has lasted two years. The food has run dangerously low, their fields are barren and their animals dying. Their wise man prophesies that the only this that can end their starvation is to send their most fertile maiden to meet the Holly King: the mythical personification of new life in winter. Elise is chosen as the village’s sacrifice.

Elise must travel through the dangerous Splinterwood Forest to find the Holly King. She is guarded on her journey by brooding, darkly handsome Uther, the village’s best warrior and Elise’s secret love. Will Elise manage to stay chaste, traveling in such close, intimate proximity to the huge, hard and hungry warrior?

Will she find the courage to surrender herself to the inhuman, ancient Holly King’s extreme, ravenous desires? And will her fertile, eager body be able to cope with the relentless onslaught of ever more extreme and lustful, stimulating pleasures in order fulfill the fertility god’s needs and end this eternal winter?